The word "Haramâ? indicates that the area has specific regulations. Allah SWT has forbidden certain actions in this particular area, such as carrying weapons, trespassing by disbelievers, keeping lost findings, hunting and other actions that are specified by the Islamic law.

The approximate distances between Masjid Al-Haram and Haram Boundry are shown on the map. 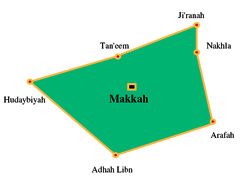 For the person intending to enter Makkah Al-Mukarramah (for whatever purpose), it is forbidden to cross certain sacred boundaries called Miqat, without being in the state of Ihram14. If a person crosses the Miqat without Ihram, then it is mandatory to return to the Miqat and assume the Ihram. If not, Damm becomes compulsory. 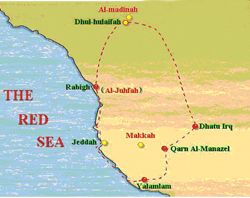 Qarn Al-Manazil is the Miqat for the people of Najd, their neighboring Gulf countries, and those who travel along the Riyad-Taif Route. As there are two main roads to Makkah Al-Mukarramah, two Masjid have been built on the exact spot of Ihram. These are known as Assail Al-Kabir and Wady Al-Muhrim.

This Miqat is today known as Assaâ??diyah and is a hilly area. It is for the people coming from Yemen, and countries to the North, and those who travel along their route. It is 100 km south to Makkah Al-Mukarramah and it has an old Masjid.

This is the Miqat for those living in Egypt and Greater Syria, and those who travel along their route. It is 178 km away from the north-west side of the Masjid Al-Haram. It lies 17 km east to the Red Sea.

This Miqat is known as Al-Dareebah and it is the for the people of Iraq and those who travel along their route. The Miqat lies about 90 km north-east to the Masjid Al-Haram.

When someone decides to perform Umrah, then they should assume the Ihram of Umrah before entering the Miqat. If one is traveling by plane and is not certain about the exact time when one will pass the Miqat or one fears that one may pass over it without knowing, then it is better to wear the Ihram before boarding the plane.

Prohibitions, in the state of Ihram

Penalty or Damm becomes compulsory only for breaking Ihram rules or for omitting a Wajib act. There are varying degrees of penalties for various contraventions. Each of the above prohibitions has to be expiated by means of offering a . For details, Please refer Masaâ??il books or Scholars.

Some suggestions to take note of, while beginning the pilgrimage:

Transliteration: Bismillahi Tawakkaltu Alallah
In the Name of Allah, I have placed my trust in Allah.

Glory be to the one who has subjugated this for us whereas we were not able to subjugate it on our own. And we will certainly be returning to our Lord. [Al-Quran]

He (NÅ«H) said, "Embark it. With the name of Allah, it sails and anchors. Surely, my Lord is Most-Forgiving, Very-Merciful. [Al-Quran 11:41]