Note: Tahiyyatul-Masjid is not to be performed when intending to perform Tawaf.

(O Allah, I am making the intention of Tawaf of Kaâ??ba, make it easy for me and accept it from me)

Istilaam: Raise your hands up, till your chest, palms facing Hajr Al-Aswad, recite the below and then push hands out towards Hajr Al-Aswad, pull back and kiss your palms.

"O Our Rabb (Sustainer)! Give to us in this world that which is best and in the Hereafter that which is best, and save us from the torment of the Hell, and let us be with the righteous in the Paradise. O Rabb of the worlds.â?

Verily! As-Safa and al-Marwah are of the Symbols of Allah. So it is not a sin on him who performs Hajj or 'Umrah of the House to perform the Tawaf between them. And whoever does good voluntarily, then verily, Allah is All-Recognizer, All-Knower. [Al-Quran] 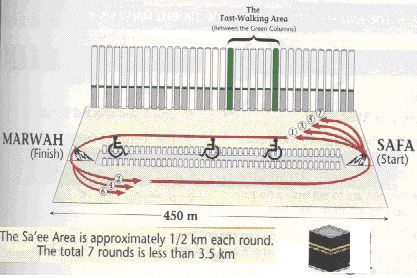 "O ! I am making an intention of Saâ??ee between Safa & Marwah; make it easy for me and accept it from me.â?

In order to release yourself from the state of Ihram, make Halq (shaving hair on the head) or make Qasr ( hair short to an equal level, all around the head). Even bald people are required to pass the blade once over the head once. Women should cut a few of hair (hair curled around ) at the end of their hair plaits. Restrictions of Ihram are over now.