In Arabic, Umrah means "to visit a populated placeâ?. Umrah is also called Hajj Al-Asghar i.e. "the small Hajjâ?. It is Sunnat Al-Muakkada h to perform Umrah once in a lifetime. Umrah can be performed throughout the year except during the five days of Hajj.

And Accomplish the Hajj and Umrah for Allah. (The Holy Quran 2:196)

Note: Pilgrims who intend to perform umrah of Hajj Al-Tamattu should complete it before 8thZul-Hijjah â?? the twelfth month of Islamic calendar.

There are two types of Umrah, depending on whether one wishes to combine the Umrah with Hajj. 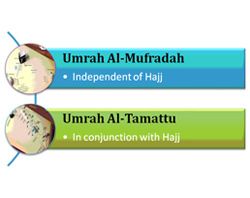 4Hajj Al-Tamattu' involves performing Umrah and then Hajj, with one Ihram for each. This form of Hajj is considered the best of the three forms of Hajj. It is the one that the Prophet Muhammad ( ) urged his followers to perform and is the one adopted by most pilgrims from overseas. Please refer the Hajj Companion booklet for further details.

I. There are two acts that are Fardh in Umrah

II. And there are two acts that are Wajib in Umrah

Note: If a  fardh is missed,  umrah is not accepted whereas if a wajib is missed, umrah can be completed by performing a  damm (penalty) as an expiation ( kaffarah) for the mistake.

When  some one decides to perform Umrah, then they should assume the Ihram of Umrah before entering the Miqat. If one is  travelling by plane and is not certain about the exact time when one will pass the Miqat or one fears that one may pass over it without knowing, then it is better to wear the Ihram before boarding the plane.

Prohibitions, in the state of Ihram.

Penalty or Damm becomes compulsory only for breaking Ihram rules or for omitting a Wajib act. There are varying degrees of penalties for various contraventions. Each of the above prohibitions has to be expiated by means of offering a  damm. For details, Please refer Masaâ??il books or Scholars

Some suggestions to take note of, while beginning the pilgrimage